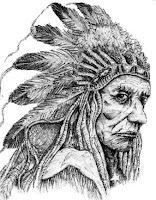 I've always been fastinated by faces, especially ones with character. No faces seem to have more character than the American Indian. Throughout the years I've done various famous Indians in different mediums. The first one was permanent pen on fabric. My favorite is the one I painted on a wooden box for my husband - I entered that one in the State Fair of Texas and got best of show. The other one is painted on a jacket that I did before a painting conventi 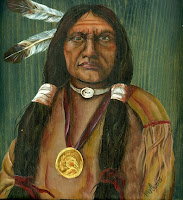 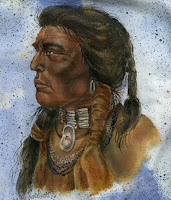 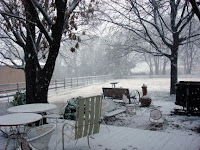 Snow! Yes, it snowed in Texas this year though not until March 5th. These were the largest flakes and the heaviest snow I've seen in over five years. This is the view from my back door. It had only been snowing about 30 minutes at this point. It continued to snow for another 2 - 3 hours. Of course, this being Texas, it was gone by the following afternoon except for the north side of the houses and any snowmen that were built. I think it was around 70 two days later. Got to love our weather.
Posted by Unknown at 3:15 PM