Sorry it took my so long to update my post - I haven't had a chance since right before I went to EDAC at the end of July - here is the update from that trip -
After much anticipation, we were off to the Enchanted Doll Artist Conference. Mother Nature was conspiring against us & we had a horrendous storm hit very early that mor

ning with torrential rains and tremendous lightening. Luckily for us, though it was a fast moving storm and did not delay our flight. It was an adventure meeting up and getting to the airport. Happy travelers waiting flight out of DFW at the airport. 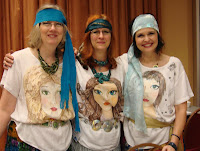 One of the first activities after arriving at the conference was the opening night festivities which consisted of a Gypsy Tea Party in honor of our head gypsy, Pamela Aramas. We were all asked to dress in our best gypsy finery. We did the best we could considering we had to pack everything in one suitcase. We laughed about looking more like aging hippies than gypsies.
The shirts we wore were drawings that I did and we got together before the conference and each of us painted her own shirt and added glitter and rhinestone embellishments. What fun!
Another thing planned for the opening night was making wish wands and exchanging them. Earlier in the day Lisa saw some shoes that she absolutely loved (they were 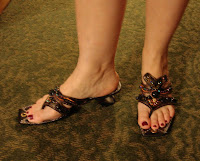 so much Lisa's style of shoe) and commented on them to the wearer. When it came time to do the wands, Lisa thought she would wish for Maria Teresa's shoes. Later in the evening when Lisa & I were doing our make-it-take-its, Maria Teresa came up to LIsa with a bag and told her that her wish had been granted. Maria Teresa GAVE Lisa her shoes! It became much talked-about the conference. Here are the infamous shoes on their new owner.

Our first class was with Cyndi Mahlstadt, shown here with her Jesters, which she is teaching in an online class (details on her site). I'm going to take that one as well. I love Cyndi's whimsical style and her teaching format.

The 2-day class the three of us took was her tree doll, which used an Altoid tin. Here is my doll after the 2nd day of class on the right.

One of the really fun activities at the conference is the pin doll swap. You create the number of pin dolls you want to swap (up to 5), wrap them and

then turn them in for swapping in a bag. Your bag is returned to you at the swap event with the same number of pin dolls from other people. I've participated both years and have a board in my studio with all the great pin dolls I've received. Here are the three of us with our pin swap dolls.

We left one night open so we could enjoy some of the local cuisine. We decided to go

to El Pinto which had been a working hacienda and had been converted into a restaurant. The food was devine and the ambience was fabulous! I wish I had thought to take more pictures while we were there.

The final night festivities include the banquet, which was our orginal
reason for creating our "doll" shirts. While I took many more pictures than are featured here, in respect to the conference and the artists of the dolls, I have not posted them. I'm sure you'll be seeing some of them on the EDAC site or in art doll publications. This conference is one of the most enjoyable ones I've ever attended and we are looking forward to going back in 2010! 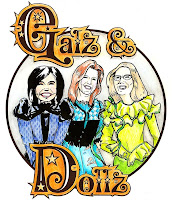 I almost forgot - I commisioned one of my friends, Michael Champion to create our Galz & Dollz logo. He did it in black & white and I colored it for our t-shirt transfers. It was created from pictures I gave him of the three of us. I used the individual images to create business cards for each of us and for our luggage tags. Vicki made us aprons with the logo on it as well.