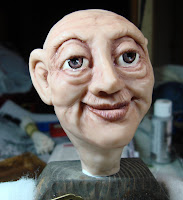 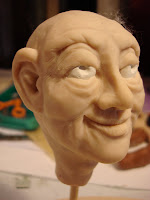 I love to sculpt faces and I generally have several "heads on sticks" (sculpted heads on dowels) sticking in the tool holder or in the paintbrush basin on my studio table. Sometimes it takes me a while to get around to completing the dolls.
Professor Pocus changed so many times from the original concept (and his head had been around my studio for a couple of years). Originally I intended to do a European style hobo clown holding a skeletal umbrella. The idea was to put him in the guest room when I had it painted. I sculpted his head, hands and feet and there he sat in that state for over a year.
Then I had the idea to use him in a box, he was going to be a magician with a top hat with a rabbit coming out of the top of the hat on his head. I began working on the box...but...that's not really what he wanted to be either.

The box took on a more rustic look and I added the great feet by Tim Holtz. The box dictated that he be more of the traveling snake oil salesman, so I started working on that concept. 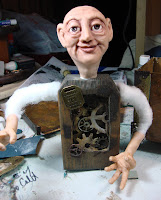 I was doing his body out of a piece of 2x4. I drilled and glued and attached his hands, arms and head. Again it sat, not quite coming together.
Last month when the gals were over for our monthly art play day, I got the idea to carve out the center of the 2x4. I dug out my handcarving tools and started working on hollowing out the center. (Husband asked why I didn't just go out to his shop and use the power tools - heck, it was 104 degrees that day & it is an uninsulated metal building). 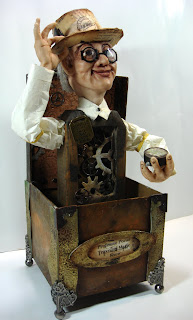 Once I carved out the center, he began coming together quickly. I used grunge board and dies to cut gears. I painted them and added them inside the 2x4. I also used Tim's sprocket gears. I decoupaged pages from an old book on the top hat and dressed him with mulberry paper. I found the perfect item in my stash for him to hold, one of the Industrial Chic pieces I had picked up from Michaels several months ago. 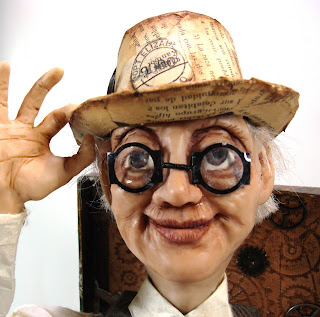 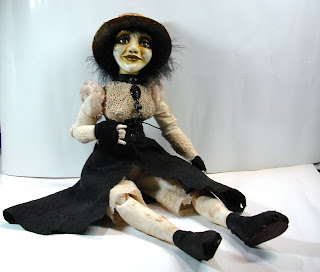 The other head on a stick that had been sitting around my studio was done with an air-dry clay that I was testing (I love this stuff - I do hope it becomes available soon). I decided that I wanted a cloth doll for this one, so I got out one of my Patti Culea books, Creative Cloth Doll Couture and used the pattern from it. I made the doll body and it was too small. I had to enlarge the pattern. The second doll was much better sized. 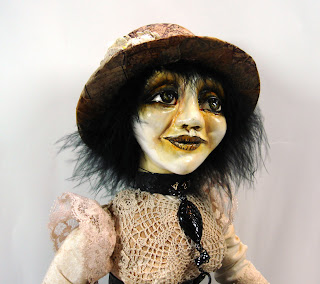 I gessoed the doll and painted her with Tim Holtz crackle paint. I used distress inks to enhance the crackles and to give her some aged character. I choose old laces to dress her and created her boots, skirt and belt from ostriche hide. I liked the hat that I'd done for the professor so much that I took rusted sewing patterns and stamped on them to decoupage on her hat. I added a Boutique Fleur flower from the Recollections collection with lace to trim her hat. I haven't decided on a name yet...any ideas?
Posted by Unknown at 3:22 PM

Evidence of an Artistic Life said...

These are fabulous, Nina! Your work is always top notch!

Nina..absolutely fabulous! Wow, your dolls keep getting better and better. You rock!!!
Wish I lived close by so we could art together.

Your figurines are fantastic